East of the Sun & West of the Moon 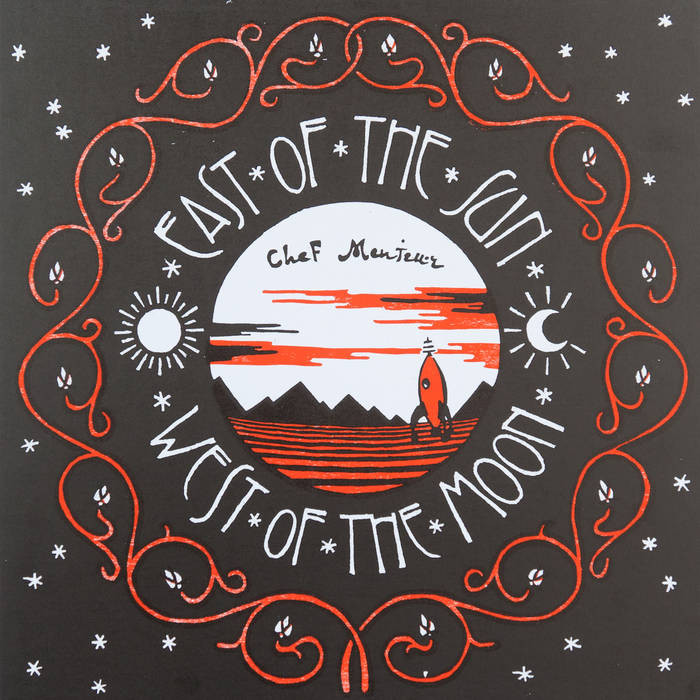 Several years in the making, the epic tone-poem known as East of the Sun & West of the Moon was released after much anticipation. It contain's Chef Menteur's most complete and ambitious work yet, with songs for lovers of classic psychedelia, space-odyssey synth drones, Warp-records style electronica, krautrock and kosmische, doom drone, hints of early metal, folk-, math-rock and prog-rock sneaking in from time to time as well. "A symphony of space rock" one might even call it.

Long-time fans of Chef Menteur's instrumental sound will find more melody and structure than they might expect from earlier albums. As one WFMU listener put it: "This Chef Mentaur [sic] track doesn't sound much like their description on Wikipedia....sounds like some of the best early Pink Floyd."

Despite being a 2-LP set, there are no throwaway songs. In fact, there was another whole 3 LPs worth of music that didn't make the cut. (Much of these extra cuts are represented in the fanclub-only digital release North of Tomorrow & South of yesterday).

The gatefold jacket packaging is a wonder unto itself. Each LP jacket is hand-printed and numbered by artist Thomas Peri, who cut the cover art from a woodblock of his own original design. Two colors on back and front means that each jacket went through 6 printing sessions. Super-collectible limited edition of 200. Also available as a digital download (comes included with vinyl).

“In my opinion CM are one of the most unheralded pioneers of ambience in the past 10 years.” –Beat the Indie Drum

“...like lying in a sunshiny meadow full of flowers while a gentle breeze ruffles the pages of your calculus textbook. ” –The Times-Picayune

“Psychedelic fans are in for a bliss-out with this one–there are some epic-length numbers on here, as well as shorter bursts of goodness... Dig in anywhere and prepare to be impressed.” –KFJC

"This is the first we've heard from this New Orleans psychedelic combo, even though this is their third record, but it's as good a place to start as any, cuz it's hard to imagine any of the other records competing with the sheer sonic scope of East Of The Sun & West Of The Moon, a sprawling double lp (which was supposedly trimmed down from a QUINTUPLE lp!!), literally years in the making, which finds the band touching on all sorts of different sounds, but all the various sonic strains held together by a thread of cosmic psychedelia that runs through the whole record. The opener, "Narconaut", should have space rock nerds losing their shit, totally druggy and drifty, the bass and drums locked tight into a loping groove, while the guitars fill the sky with wild tangles of FX heavy swirls and squiggles, clouds of swirling psychedelia, that drifts from heady and ethereal to churning and heavy. The record unwinds gradually, the second track, a smoldering bit of mathiness, rife with twang, and spidery minor key melodies, and laced with a bit of Appalachia, but building to a serious heavy crescendo before slipping into a brief bit of country, only to return to the mathiness of the opening few minutes. From there the band drift into weird woozy horn driven slowburn balladry, a washed out blues, wreathed in loads of echo and reverb, giving it a serious dub vibe, only to then slip into a brief bit of rhythmic churn, which quickly transitions into some drum driven, almost IDM sounding electronica, but that electronica is wedded to the band's brooding drifting psychedelia, there's even some sampled voices, which gives it a definite Boards Of Canada feel.
"Oxen Of The Sun" is one of the record's two centerpieces, an 11+ minute jam that flits from sound to sound, beginning as a dense chunk of buzzing space rock, driven by low slung bass and wheezing organs, it soon gives way to a sort of blurred countryish drone/drift, which in turn becomes a haunting elegy of organ drone, before exploding into some seriously heavy super distorted psychrock, that itself shifts from dense driving pound, to spaced out abstract shuffle and back again. "Ganymede" is the other one, clocking in at more than 19 minutes, this one less all over the map, a lush organ/synth/keyboard dronescape, softly roiling, spacious and kosmische, gradually building to the occasional Sunroof! like ur-drone, only to slip right back into something much more serene and pastoral. It's a fantastically heady chunk of droned out psych bliss for sure.
The rest of the record continues the group's sonic explorations, more heavy psych space outs, bits of droned out minimal guitarscapery, woozy, slide guitar laced twang flecked drifts, pocked with slow build to explosive psychedelic squalls, dark strummed folk that gives way to some seriously dense and druggy psychedelia, and a final bit of spare steel string guitar, a little coda, surprisingly spare, considering how dense and sprawling and ambitious the rest of the record is.
WAY recommended, and pretty much essential listening for all you psychedelic space phreaks out there, LIMITED TO 200 COPIES. Super elaborately packaged, in deluxe gatefold jackets, each one printed and hand numbered by the artist, the art a handmade woodblock print, includes a digital download. " -- Aquarius Records